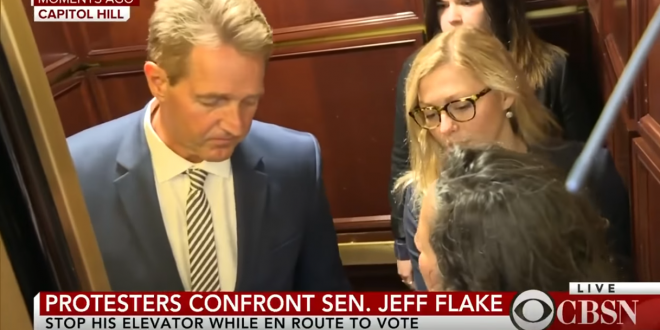 It was all so spontaneous. Maria Gallagher, 23, had come to the Hart Senate office building on Friday morning to protest the nomination of Brett Kavanaugh to the Supreme Court. And as part of her responsibilities, she’d been tasked with camping out outside of Sen. Jeff Flake’s office to somehow, someway, persuade him to vote no.

“It was all kind of a blur,” Gallagher recalled in an interview with The Daily Beast. “We all ran after him. We held open the elevator and I just started telling him why it was important and what had happened to me and why he should not let Brett Kavanaugh on the Supreme Court.”

What followed was an excruciating exchange that lasted only five minutes in time but could, just maybe, change the course of history. After another woman, Ana Maria Archila, admonished Flake for supporting Kavanaugh, Gallagher jumped in.

Hit the link and read the full interview. It appears that Gallagher has deleted her Twitter account since last night. You can guess why.

Message delivered, message received — Queens-style. Outerborough activist Ana Maria Archila, after angrily confronting Sen. Jeff Flake in a Capitol Hill elevator over his support of Supreme Court nominee Brett Kavanaugh, said the accounts of America’s abused women were no longer falling on deaf ears after the Arizona Republican delayed a vote on the judge’s candidacy for a week.

“This is a demonstration that what thousands of people have been doing — telling our stories and standing up for ourselves — is working,” Archila said after Flake asked for a week to allow an FBI probe into the sexual abuse allegations against Kavanaugh. “We will continue to fight until this nomination is withdrawn or voted down.”