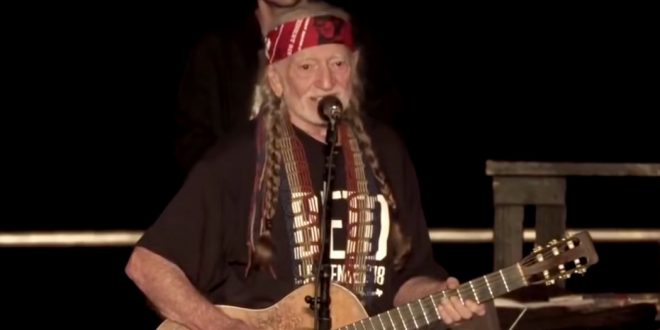 Willie Nelson took to the stage in Austin on Saturday night wearing a “Beto for Texas” cap over his trademark braided hair. It didn’t last long – within minutes he had flung the hat into the crowd and replaced it with his trusted red bandana.

That Nelson was there in the heart of the capital to lend the power of his legend to Beto O’Rourke, the Democrat who is roiling the state with an insurgent attempt to unseat Ted Cruz from his US Senate seat, remained beyond doubt. He made no effort to remove his Beto T-shirt.

But he let his music do the talking. Literally, in the case of a new song that he gave its debut which left little to the imagination. If you don’t like who’s in there, vote ‘em out, That’s what election day is all about, When they are gone, we will sing and shout.

Roughly 55,000 people stood crammed together at Auditorium Shores in Austin on Saturday for the Turn Out For Texas rally, watching as U.S. Rep. Beto O’Rourke sang “On the Road Again” with country music legend Willie Nelson.

Attendees at the free concert, which included performances from Leon Bridges and local artists like Tameca Jones, waved “Beto for Senate” signs and chanted the Democrat’s name as he addressed the crowd.

“Let tonight be a message to the future,” O’Rourke, D-El Paso, said to cheers. “Let them know who we are, what we believe in and what we are willing to do to accomplish our goals.” “It is an honor to run to represent you,” he said.