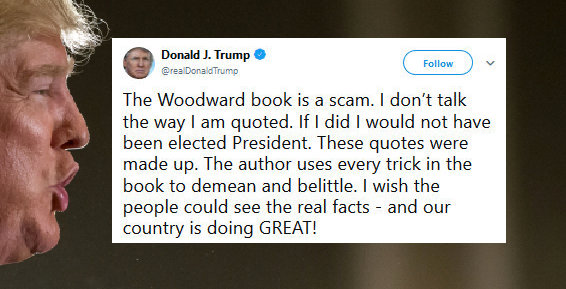 Trump: Woodward’s Book Is A Scam, I Don’t Talk Like That, If I Did I Wouldn’t Have Been Elected President

President Donald Trump is calling a new book about his administration by longtime journalist Bob Woodward “a scam.”

In a Friday morning tweet, Trump is objecting to The Washington Post writer’s narrative of Trump’s turbulent 18 months in office.

The Woodward book is a scam. I don’t talk the way I am quoted. If I did I would not have been elected President. These quotes were made up. The author uses every trick in the book to demean and belittle. I wish the people could see the real facts – and our country is doing GREAT!