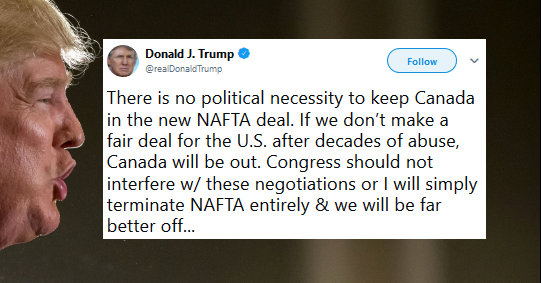 President Trump on Saturday threatened to exclude Canada from a new NAFTA deal and “terminate” the trade pact entirely if Congress gets involved in negotiations.

He went on to warn Congress, which has authority over trade agreements, “not to interfere” or he will scrap NAFTA altogether.

Under NAFTA rules, Trump can withdraw the U.S. from the pact if he gives six months’ notice, but legal experts say Congress can and likely would put up legal obstacles to block the move.

There is no political necessity to keep Canada in the new NAFTA deal. If we don’t make a fair deal for the U.S. after decades of abuse, Canada will be out. Congress should not interfere w/ these negotiations or I will simply terminate NAFTA entirely & we will be far better off…

….Remember, NAFTA was one of the WORST Trade Deals ever made. The U.S. lost thousands of businesses and millions of jobs. We were far better off before NAFTA – should never have been signed. Even the Vat Tax was not accounted for. We make new deal or go back to pre-NAFTA!