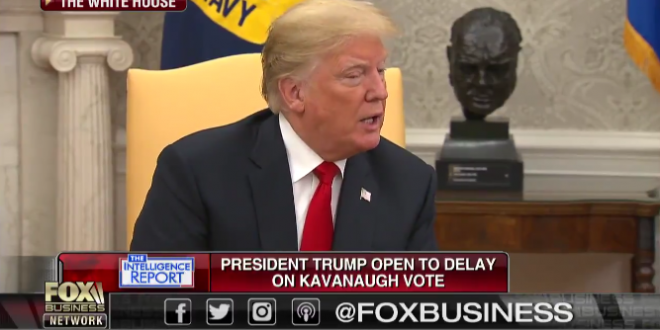 President Donald Trump said Friday that he found testimony from Christine Blasey Ford, who has accused Supreme Court nominee Brett Kavanaugh of sexual assault, “very credible.” But that won’t stop him from supporting the judge.

Trump called Ford a “very fine woman” following a Senate Judiciary Committee vote on Kavanaugh. “She was a very credible witness,” Trump said. “She was very good in many respects.” But he added that he still wants his pick to be confirmed to the high court.

President Trump on Friday, moments after the Senate committee vote, said he would defer to the Senate on whether to open an FBI Investigation into Judge Kavanaugh and delay a floor vote on his confirmation.

Speaking alongside Sebastian Pinera, the president of Chile, Mr. Trump said he would do “whatever they think is necessary,” praising Republican lawmakers and in particular Senate Judiciary Chairman Chuck Grassley’s handling of the confirmation process.

Asked what message he had for Sens. Murkowski and Collins, two lawmakers who have said they are undecided on the nomination, he said: “They have to do what they think is right.”

Wow. Trump on Christine Blasey Ford: “I thought her testimony was very compelling. She looks like a very fine woman to me. A very fine woman. It was an incredible moment in the history of our country. Certainly she was a very credible witness…”

President Trump on Dr. Ford’s testimony: “I thought her testimony was very compelling… Certainly she was a very credible witness.”pic.twitter.com/JZ6xiCGaBU