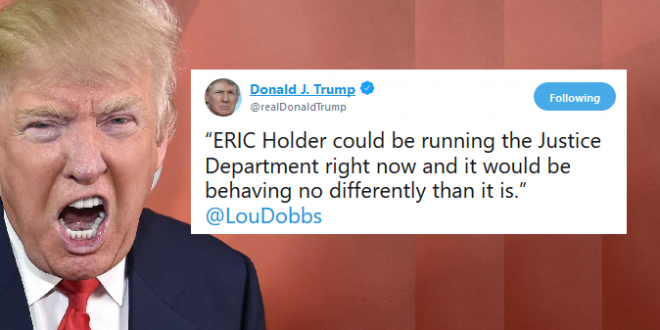 Trump Parrots Fox In Yet Another Attack On Sessions

President Donald Trump is getting his daily briefing from Fox News again. The president started off his daily Twitter proclamations with a quote from Sara Carter, who appeared on Lou Dobbs last night to discuss the real Russian collusion in 2016.

Shortly after that, Trump referenced a Fox & Friends segment based on a Daily Caller article about FBI media leaks (which, ironically enough, was sourced via media leaks). In his last tweet, Trump apparently quoted Dobbs again to take another subtle swipe at Attorney General Jeff Sessions.

“We have found nothing to show collusion between President Trump & Russia, absolutely zero, but every day we get more documentation showing collusion between the FBI & DOJ, the Hillary campaign, foreign spies & Russians, incredible.” @SaraCarterDC @LouDobbs

New Strzok-Page texts reveal “Media Leak Strategy.” @FoxNews So terrible, and NOTHING is being done at DOJ or FBI – but the world is watching, and they get it completely.

“ERIC Holder could be running the Justice Department right now and it would be behaving no differently than it is.” @LouDobbs

Rudy Giuliani did a GREAT job as Mayor of NYC during the period of September 11th. His leadership, bravery and skill must never be forgotten. Rudy is a TRUE WARRIOR!

Previous Junior: Trump Can Only Trust A Few People [VIDEO]
Next Japan Seeks To End Ban On Commercial Whaling