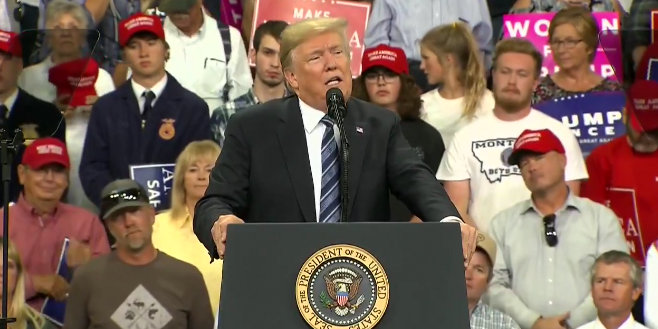 Trump: One Day My Campaign Rally Speeches Will Be Ranked With Lincoln’s Gettysburg Address [VIDEO]

“You know when Abraham Lincoln made that Gettysburg Address speech, the great speech, you know he was ridiculed? And he was excoriated by the fake news. They had fake news then. They said it was a terrible, terrible speech. Fifty years after his death they said it may have been the greatest speech ever made in America, I have a feeling that’s going to happen with us. In different ways, that’s going to happen with us.” – Glorious Leader, at last night’s Montana rally.

Trump Suggests His Speeches Will One Day Be Seen On Par with the Gettysburg Address, which the Fake News Also Bashed pic.twitter.com/Cg4ywg9Ykp

Trump on the Gettysburg Address: “Many of us know it by memory.”

“I scored, 7 years ago, with this hot playboy model..”

He really just said his speeches will some day be seen in the same tier as Lincoln’s.

I’m done. All the evens are done.

The coverage of President Lincoln’s address in the New York Times was quite favorable, actually:https://t.co/ipsgvOusbghttps://t.co/5umCU6yq1I https://t.co/8DmK3LphWN