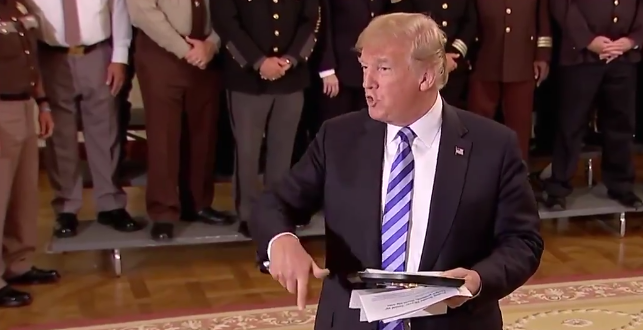 “We have somebody in what I call the failing New York Times, that’s talking about — he’s part of the resistance within the Trump administration. This is what we have to deal with. And you know the dishonest media, because you people deal with it as well as I do. But it’s really a disgrace. I will say this, nobody has done what this administration’s done in terms of getting things passed and getting things through.

“Someday, when I’m not president, which hopefully will be in about six and a half years, the New York Times, CNN and all of these phony media outlets will be out of business, folks, they’ll be out of business, because there’ll be nothing to write and there’ll be nothing of interest. So nobody has done what this administration has done.” – Glorious Leader, this afternoon.

President Trump on @nytimes anonymous op-ed: ” A gutless editorial. We’re doing great job. The poll numbers are through the roof. Our poll numbers are great. And guess what, nobody is going to come close to beating me in 2020 because of what we’ve done.” pic.twitter.com/CUvytTnIT7

Trump responding to today’s NYT oped: “So when you tell me about some anonymous source within the administration, probably who’s failing and probably here for all the wrong reasons, now, and “The New York Times” is failing.” pic.twitter.com/0zpEG0DO5L

Previous White House Blasts Anonymous Author Of NYT Op-Ed: “This Coward Should Do The Right Thing And Resign”
Next Politico: About 100 GOP US House Seats Are In Play