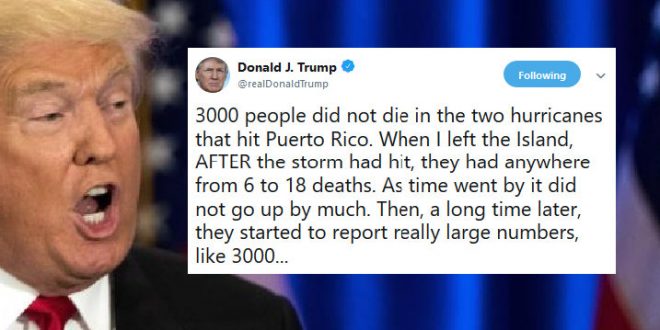 Trump: Democrats Invented The Hurricane Death Toll In Puerto Rico Just To “Make Me Look As Bad As Possible”

President Trump on Thursday appeared to cast doubt on studies that found roughly 3,000 people died in Puerto Rico as a result of Hurricane Maria. Puerto Rico officials late last month increased the death toll as a result of the 2017 storm to 2,975 after a study by the George Washington University that assessed the aftermath of the hurricane found the number was significantly higher than the 64 deaths that had originally been reported.

3000 people did not die in the two hurricanes that hit Puerto Rico. When I left the Island, AFTER the storm had hit, they had anywhere from 6 to 18 deaths. As time went by it did not go up by much. Then, a long time later, they started to report really large numbers, like 3000…

…..This was done by the Democrats in order to make me look as bad as possible when I was successfully raising Billions of Dollars to help rebuild Puerto Rico. If a person died for any reason, like old age, just add them onto the list. Bad politics. I love Puerto Rico!

Trump says Dems manufactured the 3,000 death toll from the hurricane in Puerto Rico last year “to make me look bad.” For those who ask if he really believes this, the answer is yes. https://t.co/N3wJPZianj