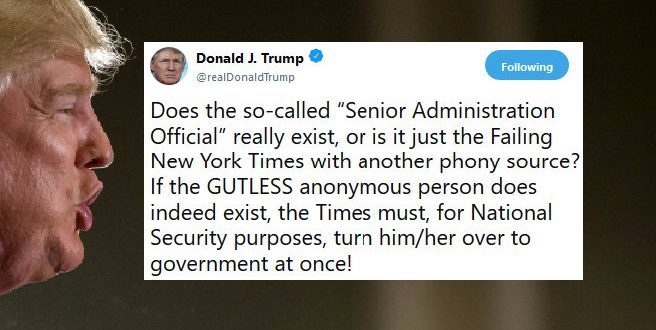 President Donald Trump demanded that the New York Times reveal the identity of a senior official who wrote an anonymous op-ed in the newspaper claiming that key members of the administration were secretly working against him.

In a Wednesday night tweet, Trump lashed out at the Times over the article’s publication, questioning whether the author even existed and citing national security as a reason for the newspaper to disclose the person’s name.

The reaction inside the White House on Wednesday afternoon ranged from shock to disbelief to frustration. The op-ed marked another setback for a West Wing already battered by a litany of recent controversies that have left some aides demoralized.

Does the so-called “Senior Administration Official” really exist, or is it just the Failing New York Times with another phony source? If the GUTLESS anonymous person does indeed exist, the Times must, for National Security purposes, turn him/her over to government at once!

I’m draining the Swamp, and the Swamp is trying to fight back. Don’t worry, we will win!