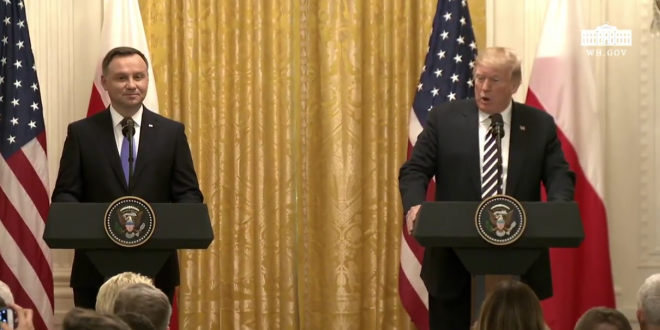 U.S. President Donald Trump is “very seriously” considering Warsaw’s request for a permanent U.S. military base in Poland, he said on Tuesday. Speaking at a joint press conference with Andrzej Duda in Washington D.C., Trump said the security of the Central European country was “almost as important” to him as to the Polish president.

“Poland is willing to make a very major contribution for the United States to come in and have a presence in Poland,” Trump said, according to a White House transcript of the press conference. “Poland would be paying billions of dollars for a base.”

Warsaw wants a U.S. Army armored division permanently stationed on its territory as a deterrent against Russian aggression, and has offered to pay up to $2 billion to make it happen. “I hope that we will build Fort Trump in Poland together, Mr. President,” Duda said on Tuesday.

Fort Trump is the top trending item on Twitter this morning.

President Donald Trump said he is considering permanently basing U.S. troops in Poland. Polish President Andrzej Duda said he would like to see that base called Fort Trump. https://t.co/XpF0592vbq

My darling, the bone spurs worsen daily. The pain grows so great, I can barely dodge the barrage of STDs in this accursed land. These savages only serve one scoop of ice cream after dinner. Send taco bowls! https://t.co/0Sy3dg33Ub

Poland’s new tactic for getting a U.S. military base? Pitch it as Fort Trump. https://t.co/kUKyvPBL7t