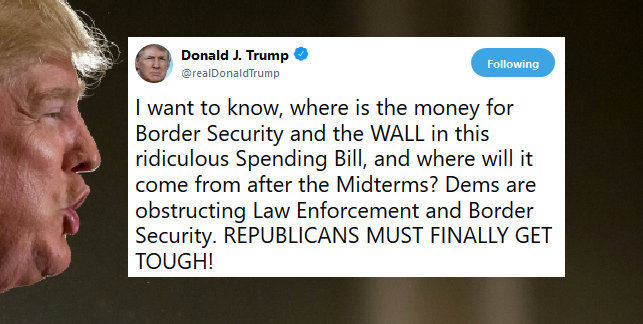 President Trump lashed out at Congress on Thursday over the lack of funding for his border wall in a recently passed spending bill, stoking a fight that GOP lawmakers had hoped to avoid until later this year.

The Senate voted 93-7 on Tuesday to pass a sweeping $854 billion spending bill that includes funding for the departments of HHS, Labor, and Education, which make up the bulk of government spending.

Of the seven senators who opposed the bill, six were Republicans who joined Sen. Bernie Sanders (I-Vt.) in voting “no.” The House is expected to take up the funding legislation next week, ahead of the Sept. 30 deadline to keep the government funded.

I want to know, where is the money for Border Security and the WALL in this ridiculous Spending Bill, and where will it come from after the Midterms? Dems are obstructing Law Enforcement and Border Security. REPUBLICANS MUST FINALLY GET TOUGH!