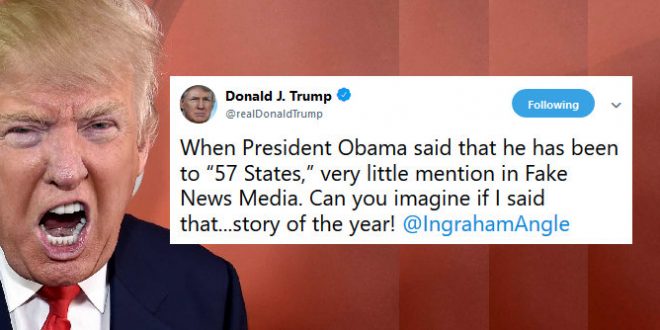 Obama’s blunder, which Ingraham also resurfaced on her show, came in Beaverton, O.R., in May 2008 when he was the leading contender for the Democratic Party’s nomination.  Obama had been on the campaign trail for 16 months at that point and he was rebuked in the media and online for his remark, The LA Times noted.

When President Obama said that he has been to “57 States,” very little mention in Fake News Media. Can you imagine if I said that…story of the year! @IngrahamAngle

“When Trump visited the island territory last October, OFFICIALS told him in a briefing 16 PEOPLE had died from Maria.” The Washington Post. This was long AFTER the hurricane took place. Over many months it went to 64 PEOPLE. Then, like magic, “3000 PEOPLE KILLED.” They hired….

….GWU Research to tell them how many people had died in Puerto Rico (how would they not know this?). This method was never done with previous hurricanes because other jurisdictions know how many people were killed. FIFTY TIMES LAST ORIGINAL NUMBER – NO WAY!

If anyone is wondering what this is about. Once back in 2007/2008 Obama made a slip of the tongue in which he appeared to refer to 57 states. Did Obama think there are 57 states? The reference was pretty clearly to 57 primaries and caucuses which make up the nominating process. https://t.co/ol0yfSwt9f

Amazing that one time Obama accidentally said “57 states” ***more than a decade ago*** and it’s still the go-to for conservatives whenever they want to try to say he’s unintelligent.