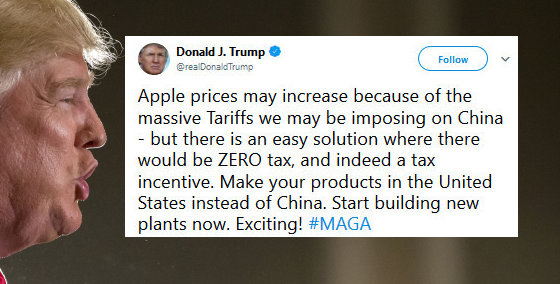 Trump: Apple Prices May Rise Due To My Tariffs

President Donald Trump on Saturday warned that the prices of Apple products may climb as a result of a new round of proposed tariffs against China, and called on the technology giant to bolster production at home to avoid the consequences of an escalating trade war.

Apple prices may increase because of the massive Tariffs we may be imposing on China – but there is an easy solution where there would be ZERO tax, and indeed a tax incentive. Make your products in the United States instead of China. Start building new plants now. Exciting! #MAGA

Trump is at his golf course in Virginia. More than half the days over the past three months he’s either visited a Trump property or held a rally. https://t.co/Z5pjdzlJSx

Previous Paul Ryan And Mitch McConnell Had To Use “Props And Flattery” To Talk Trump Out Of Government Shutdown
Next Fox Host: Obama Has Trump Derangement Syndrome