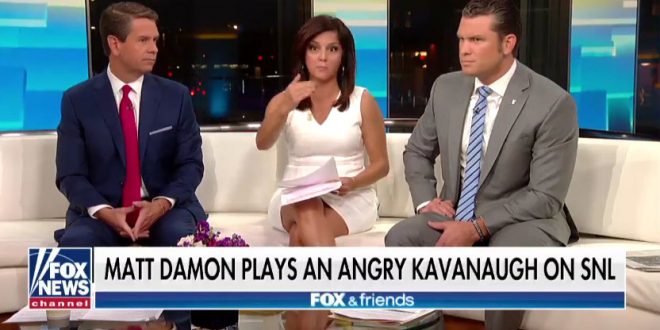 PETE HEGSETH (CO-HOST): But their idea is that the evidence of guilt is the fact that he’s a white man of privilege. That’s the first sin, the first evidence of guilt, and then everything else cascades from there. How do you walk back from that ledge where you start with that premise?

RACHEL CAMPOS-DUFFY: Here they are constantly decrying systematic racial profiling of African-Americans when it comes to law enforcement. They’re racially profiling, gender profiling in this case.

.@RCamposDuffy: “So Matt Damon has millions of dollars to defend his name…but they’re gonna make fun of and criticize Brett Kavanaugh for defending his name, his family, his reputation.” @foxandfriends https://t.co/x97HV4YEXG pic.twitter.com/5avqwIvMRI