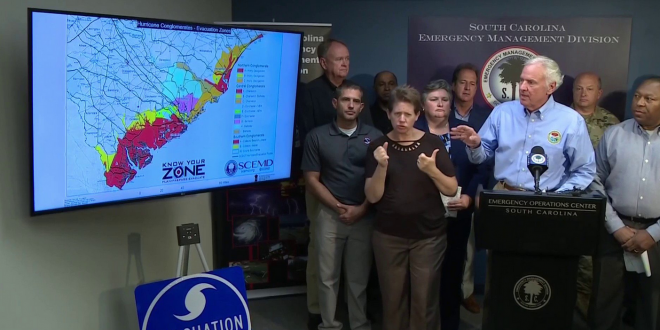 S.C. Gov. Henry McMaster announced a mandatory evacuation of the South Carolina coast on Monday. Eight counties along the coast would begin evacuating as of noon on Tuesday, McMaster said at a press briefing on Monday.

McMaster said he would reverse lanes on four main roads to facilitate the evacuation. As many as a million people could leave the coast because of the order, the governor said. “We know the evacuation order I’m issuing will be inconvenient,” McMaster said. “But we’re not going to gamble with the lives of the people of South Carolina.”

As of noon Tuesday, lanes will reverse on Interstate 26 from Charleston to Columbia and Highway 501 from Myrtle Beach. Highways 278 and 21 in Beaufort County will be ready for reversal as of noon, but officials will wait to make an order at that time.

One out of every five South Carolinians, about 1 million in all, are in the evacuation zones covering eight counties.

By midday Monday, the hurricane blew winds near 130 mph, reaching Category 4 strength capable of devastating damage. Forecasters expect Florence to make landfall somewhere near Wilmington, N.C., before sunrise on Friday with winds as strong as 120 mph.

About 3,000 state transportation workers are ready to deploy if needed to fix roads and bridges. Some 440 state law enforcement officers are already along the coast to secure homes and businesses left by evacuees along with 1,600 National Guard soldiers. The number of guard soldiers is expected to double as Florence arrives.

.@henrymcmaster has issued mandatory evac for Charleston County effective at NOON tomorrow with lane reversals on HWY 26. County schools will be CLOSED. Now is the time to prepare and make proper plans. #Florence #chswx

Gov. McMaster has issued a mandatory evacuation and the lanes will be reversed on I-26 https://t.co/AEmVH3UosM #hurricaneflorence #chswx

“We try to hang on for dear life until the last second. That’s our business plan: Hell or high water, we’re gonna be open.”

How Charleston bars and restaurants are dealing with #HurricaneFlorence evacuation orders: https://t.co/8qKiITMO7V

JUST IN: South Carolina Gov. Henry McMaster orders mandatory evacuation of all people in evacuation zones ahead of Hurricane Florence. Order goes into effect at noon on Tuesday. https://t.co/021hNnhqS8 pic.twitter.com/AKbTHNffcS

Previous WH Advisor Admits Trump Lied About GDP [VIDEO]
Next POLL: 32% Are Proud To Have Trump As President