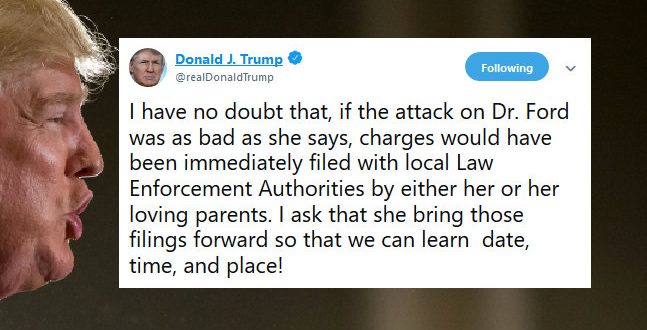 So Much For Reining In Trump On Christine Ford

The facade of restraint is broken: President Donald Trump is on the attack against the forces threatening Brett Kavanaugh‘s Supreme Court confirmation.

The tweet follows Trump’s comments to Sean Hannity on Thursday, where he questioned why Ford didn’t alert the FBI when the assault allegedly happened, when the two were teenagers.

“Why didn’t somebody call the FBI 36 years ago?” Trump asked. “I mean you could also say when did this all happen, what’s going on? To take a man like this and besmirch — now with that being said, let her have her say and let’s see how it all works out.”

Judge Brett Kavanaugh is a fine man, with an impeccable reputation, who is under assault by radical left wing politicians who don’t want to know the answers, they just want to destroy and delay. Facts don’t matter. I go through this with them every single day in D.C.

I have no doubt that, if the attack on Dr. Ford was as bad as she says, charges would have been immediately filed with local Law Enforcement Authorities by either her or her loving parents. I ask that she bring those filings forward so that we can learn date, time, and place!

The radical left lawyers want the FBI to get involved NOW. Why didn’t someone call the FBI 36 years ago?