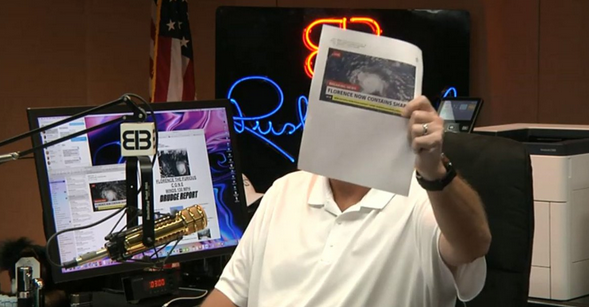 “This appeared somewhere. ‘Florence now contains sharks.’ So sharks are being lifted out of the Atlantic Ocean and dumped into the storm because it’s so strong it’s sucking them in there. And then they’re going to be in the waters. Of course the only water that might contain sharks would be storm surge. It isn’t going to be raining sharks. And that’s the predominant water source in a hurricane is rainfall.” – Rush Limbaugh, sharing a fake story that first appeared last year during Hurricane Irma.

Rush Limbaugh shared a fake story to his audience about sharks flying around in Hurricane Florence https://t.co/joatNXoXIS pic.twitter.com/7LS2kJ7txT