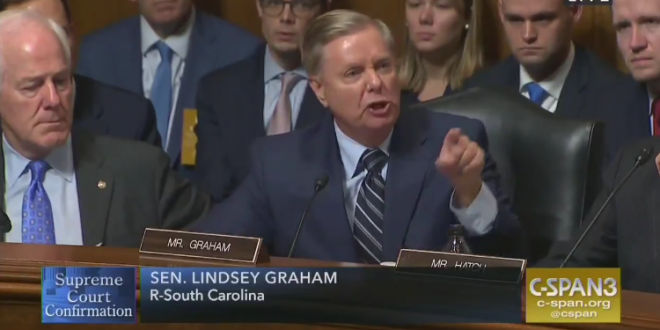 “If you wanted a FBI investigation into Brett Kavanaugh, you could have come to us,” Graham said after asking Kavanaugh if he knew Sen. Dianne Feinstein’s (D-Calif.) staff had the allegation of sexual assault against him for more than 20 days.

“What you want to do is destroy this guy’s life, hold this seat open and hope you win in 2020. You’ve said that not me,” Graham yelled, his face turning red. “You’ve got nothing to apologize for,” he said, turning to Kavanaugh. “When you see [Supreme Court justices] Sotomayor and Kagan, tell them that Lindsey said hello, ‘cause I voted for them.”

Lindsey Graham’s argument that the fact that a person is successful and powerful proves he didn’t do bad things in the past is really conservatism boiled down to its essence.

Nothing makes Lindsey Graham angrier than the idea of someone’s sexual secrets being revealed. #KavanaghHearing

.@LindseyGrahamSC has more decency and courage than every Democrat member of the committee combined. God bless him.

Lindsey Graham REALLY doesn’t want his kompromat to come out.

“This is the most unethical sham since I’ve been in politics.” – @LindseyGrahamSC pic.twitter.com/tIRmzQhBuc

.@LindseyGrahamSC just had another public meltdown, this time during the hearing. He’s now at a Trump-level of unhinged.

Lindsey Graham's meltdown just now is one of the most shameless, transparent, and depraved things I've ever seen in politics.

Previous Kavanaugh RAGES: This Is Revenge For The Clintons
Next LIVE VIDEO: Brett Kavanaugh Testifies On Allegations