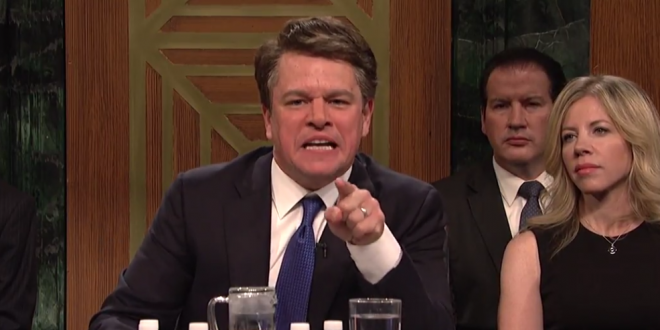 “Saturday Night Live” returned for its 44th season Sept. 29 and wasted no time diving back into political sketches, with Matt Damon appearing as Brett Kavanaugh and Rachel Dratch returning as Senator Amy Klobuchar for a cold open sketch about his hearing.

Mysteriously absent from the top of the hearing, as Alex Moffat’s Chuck Grassley explained he was “shadowboxing in the bathroom,” Damon’s Kavanaugh sat down in irate fashion and said, “Oh hell yeah” when asked if he was ready to begin.

“Let me tell you this,” he said. “I’m going to start at an 11. I’m going to take it to about a 15 real quick. First of all I showed this speech to almost no one — not my family, not my friends. … This is my speech. There are others like it, but this is mine. I wrote it myself last night while screaming into an empty bag of Doritos.”

“I went to Yale!,” Damon said repeatedly as SNL re-created this week’s Senate hearings. “I worked my butt off to get here! I lifted weights! Every day with Tobin and PJ and Squee and Donkey Dong Doug and had a couple thousand beers along the way.”

The sketch gave just about everyone on the SNL cast a chance at the Senate – Kate McKinnon, of course, was Senator Lindsey Graham, Chris Redd was Cory Booker, Pete Davidson was Sheldon Whitehouse, getting the chance to introduce to SNL the concepts of boofing and Devil’s Triangle.

The cast did not miss the chance to mock some of the senators on the judicial committee, taking aim at Senator Lindsey Graham. When the floor was yielded to the Republican senator, Graham, played by Kate McKinnon, mocked the senator’s support of Kavanaugh. “I know I’m supposed to shut up because I’m a single white male, 5’10” uncut. But I will not shut up because this is a bunch of crap,” he said.

Just when I thought the #WHCD set the standard for depravity, #SNL mocking a man who courageously stood up for his own dignity and his family marks a new low in what passes for “comedy” these days.

Previous CHATTER AWAY: Overnight Open Thread
Next Trump: Kim Jong-Un And I Fell In Love [VIDEO]