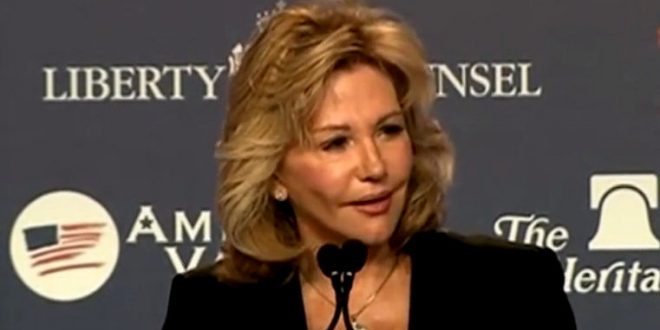 “That was the gate that opened the way to homosexual marriage. And within —what?— 12 years or something like that, we had homosexual marriage in this country. So we went from 9/11, when things were maybe a little more normal and we lost so much ground in such a fast time. It was just within that 12 years that that momentary national awakening to the need for an Almighty God turned into a nationwide fist of defiance in his face.” – American Family Association radio host Sandy Rios, speaking today at the Family Research Council’s Values Voter Summit.

We’re sure that Sandy Rios didn’t intend it this way, but this Bible passage she read at #VVS18 seems to describe Trump pretty accurately. pic.twitter.com/h4IUFMtWKw

In a video before AFA radio host Sandy Rios speaks, school shootings are blamed on a lack of Christianity in American culture.