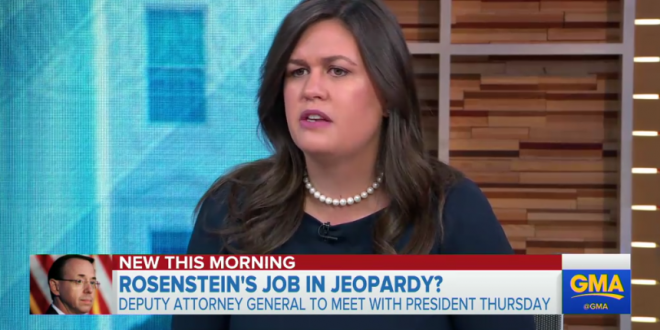 White House press secretary Sarah Sanders would not offer any assurances that President Trump will allow the special counsel investigation to continue without delay if Deputy Attorney General Rod Rosenstein exits the Justice Department, telling “Good Morning America” Tuesday that she doesn’t want to get ahead of the process.

“I’m not going to get ahead of the conversation that’s going to take place, certainly he wants things to take place,” Sanders said of Trump’s upcoming meeting with Rosenstein.

Sarah Sanders doesn’t answer if Trump wants to keep Rod Rosenstein as the deputy attorney general, or if he’ll fire him if he refuses to resign. She says wait for the conversation Thursday, but adds they had a good, long talk yesterday.