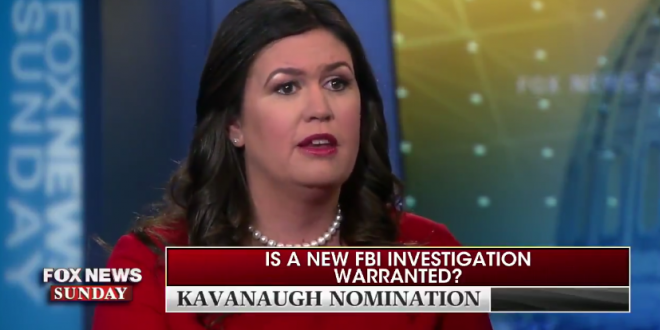 Sanders asserted on “Fox News Sunday” that Senate Republicans will dictate the terms of the FBI investigation into Christine Blasey Ford’s allegations that Kavanaugh pinned her to a bed and groped her at a high school party in the 1980s. Sanders claimed Democrats have “exploited” both Ford and Kavanaugh in recent weeks.

“I think that we cannot allow the people that have acted in bad faith to determine and allow this to become a total fishing expedition by the FBI,” Sanders said.

On FBI Investigation, @PressSec tells Chris: This can’t become a fishing expedition like the Democrats would like to see it be. #Kavanaugh pic.twitter.com/jQ1vN0ywLg

On reports of the White House limiting FBI Investigation, @PressSec tells Chris: The White House is not micromanaging this process. The Senate is dictating the terms…the FBI, this is what they do, we’re out of the way and letting them do exactly that. pic.twitter.com/0GqeYpKGcz

On potential meeting between President Trump and Deputy AG Rod Rosenstein, @PressSec tells Chris: A date for that hasn’t been set. It could be this week. I could see it pushing back another week given all of the other things that are going on with the Supreme Court. pic.twitter.com/vGszXB6diE