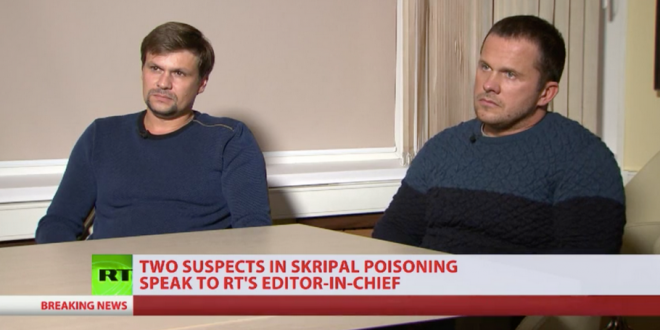 Two men named as suspects in the poisoning of a Russian ex-spy in the UK claim they were merely tourists. The men, named as Alexander Petrov and Ruslan Boshirov, told the RT channel that they went sightseeing in Salisbury but returned to London within an hour.

They are accused by the UK of trying to kill Russian ex-spy Sergei Skripal and his daughter Yulia in March. The UK has described them as agents of Russia’s military intelligence service, the GRU.

“The town was covered by this slush. We got wet, took the nearest train and came back” to London, they told RT, Russia’s state-run international broadcaster.

In the interview, they claimed to be in the fitness industry and said friends had suggested they visit “wonderful” Salisbury and to go sightseeing around Wiltshire. RT ran part of the interview on Thursday morning, in which Petrov said: “We are those shown to you in the (CCTV) pictures. Yes they are our real names.”

They are then accused of looking nervous, to which Boshirov responds: “What would you look like? When your life is turned upside down in a moment?”

When asked why they were in Salisbury, the men said: “Our friends had been suggesting for a long time we visit this wonderful town. Its famous Salisbury cathedral, famous for its 123m spire…the clock… the oldest of its kind that is still working.”