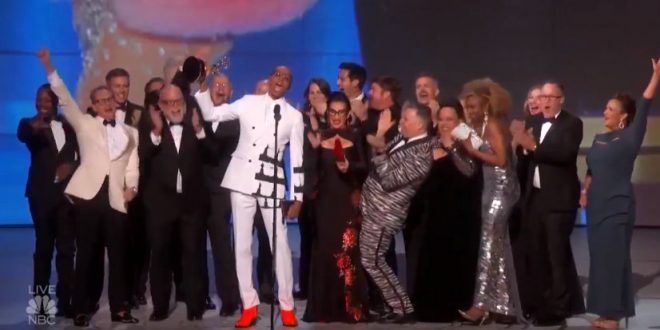 RuPaul’s Drag Race finally topped the competition, snatching the Emmy for Outstanding Reality-Competition Series — marking the fourth show ever to win the category since the prize was introduced in 2003. Previous winners include The Amazing Race (10), The Voice (4) and Top Chef (1). The VH1 series beat out The Amazing Race, American Ninja Warrior, Project Runway, Top Chef and The Voice.

The win follows the series’ biggest season ever — its 10th(!) — reaching a ratings high after moving from Logo to VH1 and earning 10 Emmy nominations plus another two for its aftershow, Untucked. During the Creative Arts Emmy Awards, which were handed out Sept. 8-9, RuPaul’s Drag Race won four Emmys, including RuPaul’s third consecutive win for Outstanding Host for a Reality or Reality-Competition Program. The show has won a total of nine Emmys since first being nominated in 2015.

RuPaul on the importance of unity during this divisive time in America: “We celebrate the people who dance outside the box, not just drag queens.” #Emmys #DragRace https://t.co/ITUhPVU1Mt pic.twitter.com/1JOTouNzlT

.@RuPaul sent a message to “all the dreamers out there” during his #Emmys acceptance speech: “If you can’t love yourself, how the hell you gonna love somebody else.” pic.twitter.com/NkBkutyqMD