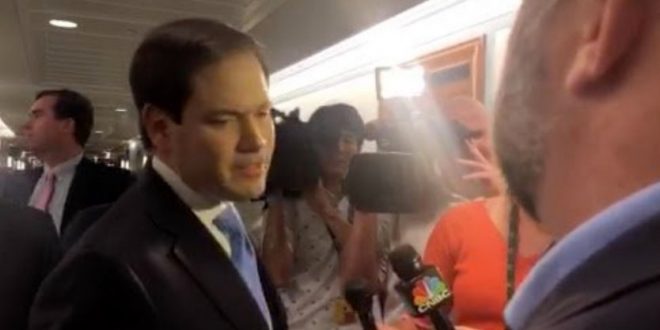 Alex Jones and Sen. Marco Rubio traded insults and nearly got into a physical altercation outside the Capitol Hill hearing on Silicon Valley’s role in aiding potential foreign influence over U.S. elections.

Jones approached Rubio outside the hearing in which the Florida Republican senator had just ridiculed Twitter CEO Jack Dorsey and other tech companies for working with “authoritarian” governments like China and Turkey to censor dissenting voices.

Rubio initially appeared to recognize the Infowars host, who was recently banned from nearly every social media platform except Twitter, before Jones began interrupting Rubio’s interview with other reporters. The exchange escalated until the senator told Jones “get your hand off me, don’t touch me… I’ll take you out myself, I don’t need security.”

“Go back to the bathhouse,” he hollers as Rubio departs. 😐

Marco Rubio tells Alex Jones, “Get your hand off of me. Don’t touch me again, man. I’m asking you not to touch me.”

Later, Rubio says to Jones, “If you’re trying to get arrested man, I’ll take care of you myself.” https://t.co/yfPrxnDDXp

Heated exchange between Rubio and Alex Jones in the Senate hallway — Jones crashes a Rubio interview and touches Rubio’s shoulder. Rubio tells Jones not touch him again, says he’ll “take care of you myself” rather than calling the police.

Your daily pick-me-up is Marco Rubio setting off Alex Jones by repeatedly telling him, “I don’t know who you are, man.” There is no greater put-down for a vile attention-seeking clown than that. https://t.co/UgqZCLbrs1

the Jones/Rubio footage is pure pro-Trump media circus. him, posobiec, fairbanks, loomer and others appear to be there just to make a scene. they’re not interested in the companies’ responses or lawmakers’ questions. its a giddy show. worth remembering that.

Why we don’t allow guns in the Capitol: Two gun extremists – Marco Rubio and Alex Jones – argue in Senate hallway. After Jones touches Rubio’s shoulder, Rubio tells him not touch him again or he’ll “take care of you myself” as opposed to calling police and having him arrested. https://t.co/nUiwh6VLzf

Alex Jones had come back into the Senate Intel committee after confronting Rubio in the hallway. Can hear him speaking into his camera as he films behind me. pic.twitter.com/xWJdWsIDeM

Laura Loomer and Chuck Johnson are front row with me. https://t.co/OJgNv3EWc6

Here's the moment in @CassandraRules livestream where Alex Jones puts hands on Marco Rubio and is told "You're not going to get arrested, I'll take care of you myself.

Previous Kavanaugh Dodges On Whether A Sitting President Can Be Subpoenaed: That’s A Hypothetical Issue [VIDEO]
Next Trump To Daily Caller: I Could Give You 100 Pictures Of Mueller And Comey Hugging And Kissing Each Other