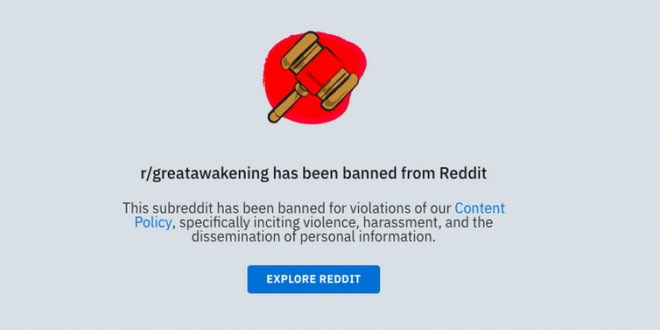 The bizarre QAnon conspiracy theory that has captured the imagination (and apparel budget) of some reality-challenged Trump supporters is starting to lose its footing.

On Wednesday afternoon, Reddit shut down /r/greatawakening, the main subreddit used by Q followers to piece together clues, or “breadcrumbs,” left by the strange internet prophet they follow.

At the time the board was closed, it boasted more than 54,000 followers, or “patriots” in Q speak. At least six other Q subreddits were also banned on Wednesday, including r/QProofs, r/The_GreatAwakening, r/biblicalQ, and r/thestorm, and others.

A spokesperson confirmed to The Verge that r/greatawakening was banned for violating Reddit’s policy against “inciting violence, harassment, and the dissemination of personal information,” while r/The_GreatAwakening was taken down for inciting harassment.

The takedowns come on the heels of banning of r/MillionDollarExtreme earlier this week, the community belonging to alt-right comedy troupe of the same name led by Sam Hyde, Nick Rochefort, and Charls Carroll.

r/MillionDollarExtreme and associated subs /r/BillionShekelSupreme and /r/ChadRight were banned from the site on Monday night, a Reddit spokesperson confirmed to The Verge, citing violations of the company’s most recent content policy update.

Threats to kill Clinton pervaded GreatAwakening earlier this month when users were incensed by a Qanon-based theory that she was somehow causing military planes to fall out of the sky. GreatAwakening members implored the community to “kill all enemies”

The Reddit ban will hamper the Qanon theory’s spread and splinter its followers, but it is not a death knell for the theory’s faithful community. Tens of thousands of users congregate on Twitter and in closed Facebook groups dedicated to QAnon. One of the most popular, named “QAnon Follow The White Rabbit” has more than 51,000 members.