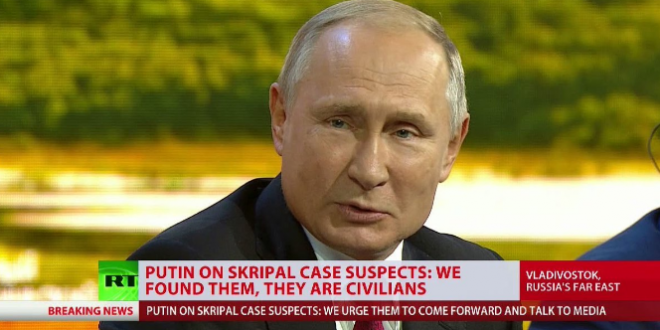 The two suspects in the poisoning of ex-Russian spy Sergei Skripal and his daughter are civilians, not criminals, Russian President Vladimir Putin says. The UK government named them as Alexander Petrov and Ruslan Boshirov, and said they were from Russia’s military intelligence service, the GRU.

Mr Putin said his government had found the pair and he hoped they would appear soon and tell their story. Mr Skripal and Yulia were poisoned in Salisbury, in the UK, in March. “We know who they are, we have found them,” Mr Putin said in the far eastern city of Vladivostok.

British officials have said the men were agents of Russian military intelligence dispatched to kill Sergei Skripal, a former Russian spy who had given information to British intelligence. He was imprisoned in Russia before being released in a spy swap in 2010.

Putin’s remarks appeared to be a denial that the men worked for Russia’s military intelligence service, the Main Directorate, commonly called the GRU. Theresa May told parliament earlier this month that the attack “was almost certainly also approved outside the GRU at a senior level of the Russian state”.

Scotland Yard has issued a European arrest warrant for the two men, who have not been seen publicly since the March attack. The Russian’s president’s words marked a departure from his country’s earlier position, which was to disregard the evidence released by Scotland Yard as a fabrication.