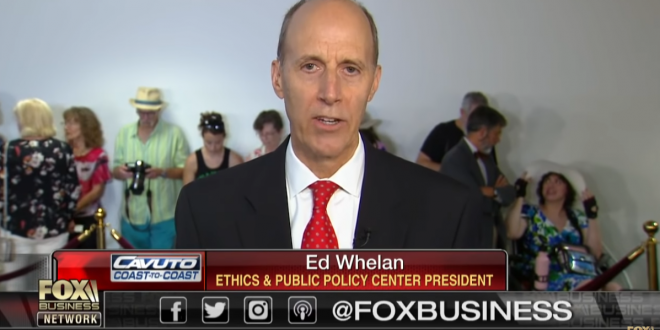 A prominent conservative commentator teased the revelation of “compelling evidence” that would exonerate Supreme Court pick Brett Kavanaugh of a sexual assault allegation, electrifying the nominee’s supporters on Twitter.

But the argument laid out Thursday, which appeared to suggest that accuser Christine Blasey Ford had mistaken Kavanaugh for another person, was met with a backlash from many on the left and right. Some said the commentator, Ed Whelan, had opened himself up to a possible lawsuit. Ford herself rejected the notion, and Whelan apologized Friday morning.

Whelan is a prominent figure in conservative circles. He is the president of the Washington, D.C.-based conservative think tank Ethics & Public Policy Center, a veteran of previous Supreme Court confirmations, and a vocal supporter of Kavanaugh, President Donald Trump’s second nominee to join the high court in two years.

Whelan cited a combination of Google Maps, Zillow listings, a Facebook post, and the Georgetown Prep yearbook to concoct the theory that while Ford “may well have been the victim of a severe sexual assault by someone 36 years ago,” it is possible that she was “mistakenly remembering” a different student from Kavanaugh.

Whelan named and posted photos of a former Kavanaugh classmate who he said “resembled” the nominee, all but accusing him of being the “real” attempted rapist.

Ed Whelan, a former clerk to the late justice Antonin Scalia and president of the Ethics and Public Policy Center, pointed to floor plans, online photographs and other information to suggest a location for the house party in suburban Maryland that Ford described. He also named and posted photographs of the classmate he suggested could be responsible.

Ford dismissed Whelan’s theory in a statement late Thursday: “I knew them both, and socialized with” the other classmate, Ford said, adding that she had once visited him in the hospital. “There is zero chance that I would confuse them.”

Republicans on Capitol Hill and White House officials immediately sought to distance themselves from Whelan’s claims and said they were not aware of his plans to identify the former classmate, now a middle school teacher, who could not be reached for comment and did not answer the door at his house Thursday night.

This morning Whelan’s bullshit earned a top-of-site mention from Matt Drudge, who linked to fellow homocon fake news conspiracy nutjob Gateway Pundit. As you can see below, Whelan is now desperately backpedaling.

I made an appalling and inexcusable mistake of judgment in posting the tweet thread in a way that identified Kavanaugh’s Georgetown Prep classmate. I take full responsibility for that mistake, and I deeply apologize for it. I realize that does not undo the mistake.

You are a vile, pathetic disgrace.

You will not escape consequences for a despicable plot hatched over many days.

Not only does it not undo it, Fox and Friends credulously repeated it earlier today as a plausible theory, as opposed to wildly irresponsible speculation https://t.co/Gc6kyPGWxL

Having handled high profile defamation claims for plaintiffs, this “republication” act by @FoxNews not only creates greater liability for @EdWhelanEPPC but also opens itself for independent liability. https://t.co/X9ClfFXalx