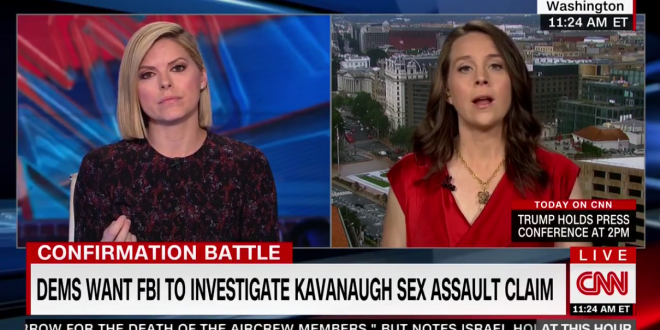 Interesting and perhaps disturbing moment a short time ago as Carrie Severino, spokesperson of the Judicial Crisis Network, was interviewed on CNN. The JCN is the central campaign arm for Republican judicial nominations. The Federalist Society grooms and chooses the nominees. The JCN runs the campaigns, runs political ads in Senators’ states, as necessary. Here Severino argues that it’s not clear that what Ford describes wasn’t simply “rough horse play” as opposed to attempted rape.

Kavanaugh spokesperson/activist says it’s not clear that the incident was attempted rape as opposed to just “rough horseplay”. pic.twitter.com/cANvVNjFKX

How can it be horseplay if he wasn’t at the party? Asking for non-liars everywhere.

And now the “horseplay” defense. With friends like these … https://t.co/D77VZaef7v

rough horseplay at the party he wasn’t at https://t.co/rYBB62wZu1

You don’t suffer years of trauma from “horseplay.” This is shameful.

COMING SOON:
—Waterboarding = “goofing around”
—Being thrown down a flight of stairs = “shenanigans”
—Murder = “just breaking your balls a little” https://t.co/3lq0wz0jx7

If the ‘rough horseplay’ defense doesn’t work, they’ll have to pivot to ‘Hey, she got away, so it couldn’t have been THAT bad, right?’

I’m a regular guy: I put my pants on one leg at a time and I turn up my music real loud during horseplay to drown out the screams. https://t.co/9BKA2cqhLR