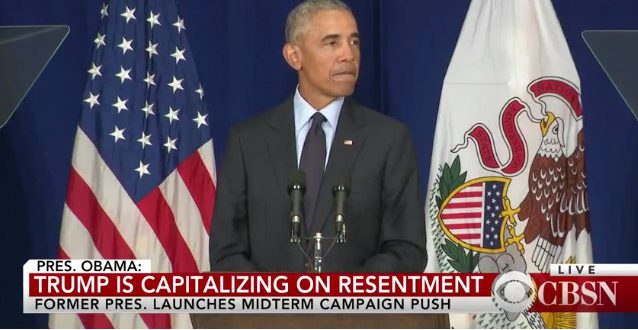 Former President Barack Obama said President Donald Trump is “capitalizing on resentment that politicians have been fanning for years” and questioned “What happened to the Republican Party?” a preview of Obama’s message for the fall’s midterms and his most pointed rebuke to date of his successor in the White House.

Obama stepped back into the political fray Friday, delivering a speech at the University of Illinois at Urbana-Champaign. One theme of Obama’s speech is how the history of the United States has always been progress and “backlash to progress,” and the former President argued the country is currently in one of those backlash moments.

“[They] embraced wild conspiracy theories like those surrounding Benghazi. Or my birth certificate. Rejected science, rejected facts on things like climate change. Embraced a rising absolutism from a willingness to default on America’s debt by not paying our bills.

“A refusal to even meet, much less consider, a qualified nominee for the Supreme Court because he happened to be nominated by a Democratic president. None of this is conservative.

“I don’t mean to pretend I’m channeling Abraham Lincoln now, but that’s not what he had in mind, I think, then he helped form the Republican Party. It’s not conservative. It sure isn’t normal. It’s radical.”