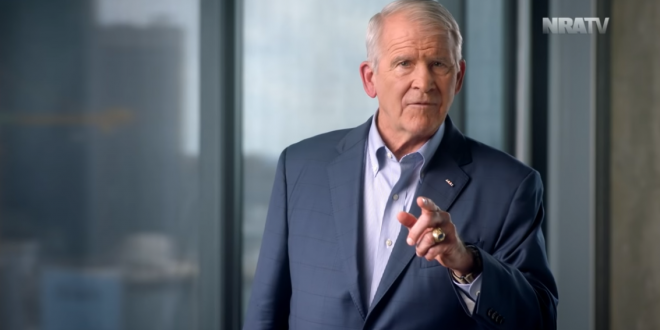 NRA President Oliver North: Brett Kavanaugh Is Being Smeared Because He Backs The Second Amendment

“A man who refers to himself as Spartacus smears a man who serves the homeless, as a racist. A political party coordinates violent protests to smear a father and run his children out of the room. A man who lied about military service, who stole valor, smears a humble public servant and calls for his nomination to the Supreme Court to be withdrawn. A woman who wants to confiscate your firearms leaks an unsubstantiated accusation to smear a man because he believes in our Second Amendment.

“Politicians call a privileged senator who killed a woman, a lion, and now they smear Brett Kavanaugh as a threat to women. Since the election of Donald Trump, the character assassination of good Americans like Brett Kavanaugh by those with half his intellect and a fraction of his virtue, has been unconscionable.

“I didn’t hold dying Marines in my arms defending freedom, so corrupt politicians could disgrace their heroic sacrifice. We the people denounce their character assassination, their hypocrisy, their lies. And we proudly stand with Brett Kavanaugh. And we the people, will bring dignity back to our democratic process.” – NRA president and multiple felon* Oliver North, in an ad issued today.

*Four years after his sentencing, North’s convictions were vacated upon appeal on a technicality about his having been granted immunity for portions of his testimony. North’s victory in the appellate court largely came due to help from the ACLU.