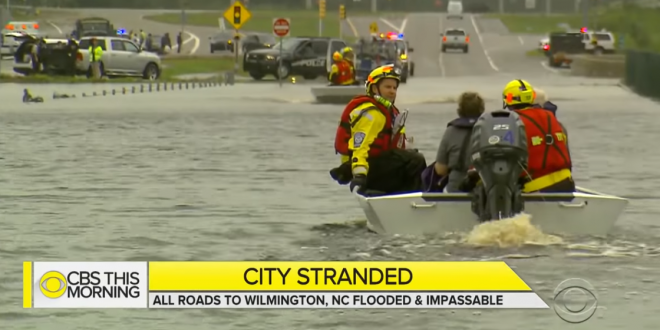 Storm-weary residents of North Carolina struggled Monday to loosen the grip of Florence, the lingering killer that has closed more than 100 roads, cut off power to almost 500,000 homes and businesses and essentially cut off the city of Wilmington from the world.

At least 17 people have died in the wreckage of the hurricane-turned-tropical depression that dumped 30 inches of rain in parts of the state since last week. In Wilmington, officials were planning to fly food and water into the coastal city of almost 120,000 people.

The National Weather Service has measured 23.59 inches of rain at the city’s airport since Thursday. “Our roads are flooded,” said Woody White, chairman of the board of commissioners in New Hanover County. “There is no access to Wilmington.”

Catastrophic flooding from Florence spread across the Carolinas on Sunday, with roads to Wilmington cut off by the epic deluge and muddy river water swamping entire neighborhoods miles inland. “The risk to life is rising with the angry waters,” Gov. Roy Cooper declared as the storm’s death toll climbed to 17.

The storm continued to crawl westward, dumping more than 30 inches (75 centimeters) of rain in spots since Friday, and fears of historic flooding grew. Tens of thousands were ordered evacuated from communities along the state’s steadily rising rivers — with the Cape Fear, Little River, Lumber, Waccamaw and Pee Dee rivers all projected to burst their banks.

“We are going to get through this together, but we as a community have to come together through these very tough times.”- Mayor Bill Saffo pic.twitter.com/9dSawA6aUX

Previous Hillary: My Fears About Trump Were Not Overblown
Next Some Illinois Schools Install Active Shooter Alarms