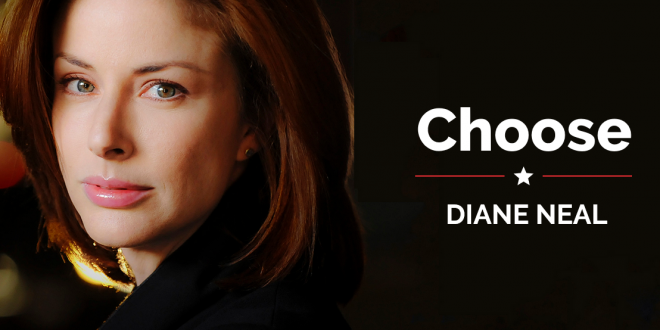 Actress Diane Neal will be on the November ballot as an independent congressional candidate in a sprawling upstate New York district after winning a court case over her petition signatures.

The state Board of Elections last month rejected over 1,800 of the more than 4,100 signatures on Neal’s petition to get on the ballot in the 19th Congressional District.

On Monday, the state Supreme Court Appellate Division ruled in Neal’s favor in her challenge of the decision. Democrat Antonio Delgado is challenging Republican Rep. John Faso to represent the district north of the New York City area.

Neal played prosecutor Casey Novack on more than 100 episodes of Law & Order: Special Victims Unit. She describes herself as “a little libertarian, a lot liberal, and mostly progressive.”

Tweets aren’t policy and they’re not campaigning. Using my own hard-earned money to fight for neighbors and my home is as serious as it gets. Inspiring volunteers vs paid ‘consultants’ is a plus, not a sign of weakness. Make up whatever false narrative you choose, it’s not truth. https://t.co/o9nXbJyEp7

Echoing false information helps nothing. NY19 is a majority unaffiliated district. Many people are sick of bought candidates who spread fear, lies and division while advocating for big money and big parties. Voters are neglected. I can win. And I can represent residents like me.

In the name of justice and all that is right in the Republic, the NY high court has confirmed I AM ON THE BALLOT as a candidate for NY19th Congressional District🇺🇸I will fight for you, for reason, and against corruption. Help our cause by donating. https://t.co/Xr9xP7KrAY

Took me 9 years for this first one…and many more to come. I HIGHLY recommend it. If I can do it, anyone can;) And many thanks to all the cast mates, writers, crew and producers I bored to tears more than once prepping for tests in (fill in any subject here). #Harvard18 💖 pic.twitter.com/p4YyOmoj4e