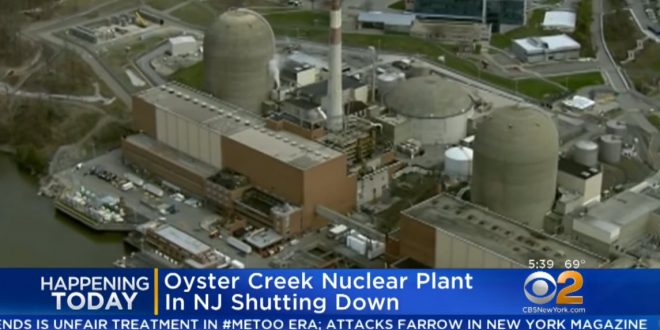 The oldest nuclear power plant in the country will shut down later today, months earlier than scheduled and a decade before its license runs out.

That license was renewed for an additional 20-year term in 2009, a year after the plant was integrated into Exelon Generation, but talks soon turned to closing the plant after efforts to beef up its cooling systems fell through.

After 49 years of safe and reliable operations, we celebrate the legacy of Oyster Creek Generating Station as operators take it offline for the final time. DYK: The plant’s lifetime carbon-free footprint was the equivalent of removing nearly 31 million cars from the road. pic.twitter.com/DNwkHMqBL5

Oyster Creek Nuclear power plant closes today, and with it the relevance of the best NJ Pizzeria window display in America. (this is the pizzeria just down the road. Photo I took in 2016) pic.twitter.com/o37Wsf6QG1