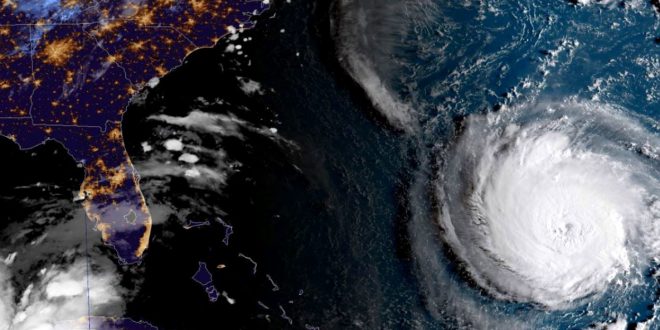 Hurricane Florence will lash the Carolinas beginning late Thursday as an intense Category 4 hurricane with life-threatening storm surge, destructive winds and massive inland rainfall flooding in one of the strongest strikes on record for this part of the East Coast.

Tuesday morning, a hurricane watch and storm surge watch were issued for the entire coast of North Carolina, including Albemarle and Pamlico Sounds, and the South Carolina coast as far south as Edisto Beach. This includes Charleston, Myrtle Beach, Wilmington and the Outer Banks.

Florence appears to be replacing its eyewall Tuesday morning, something that can happen multiple times in intense hurricanes. During this period, the hurricane may weaken a tad, but then gain strength again as the outer eyewall contracts inward, replacing the old inner eyewall.

The last time the midsection of the East Coast stared down a hurricane like this, Dwight Eisenhower was in the White House and Marilyn Monroe and Joe DiMaggio were newlyweds.

Hurricane Florence could inflict the hardest hurricane punch the Carolinas have seen in more than 60 years, with rain and wind of more than 130 mph (209 kph). North Carolina has been hit by only one other Category 4 storm since reliable record keeping began in the 1850s. That was Hurricane Hazel in 1954.

In comparison, Florida, which is closer to the equator and in line with the part of the Atlantic where hurricanes are born, off the African coast, has had at least five hurricanes in the past century of Category 4 or greater, including Hurricane Andrew in 1992.

For many people, the challenge could be finding a safe refuge: If Florence slows to a crawl just off the coast, it could bring torrential rains all the way into the Appalachian mountains and as far away as West Virginia, causing flash floods, mudslides and other dangerous conditions in places that don’t usually get much tropical weather.

“This is going to produce heavy rainfall, and it may not move very fast. The threat will be inland, so I’m afraid, based on my experience at FEMA, that the public probably not as prepared as everybody would like,” said Craig Fugate, former director of the Federal Emergency Management Agency.

Previous CHATTER AWAY: Overnight Open Thread
Next Junior: Trump Can Only Trust A Few People [VIDEO]