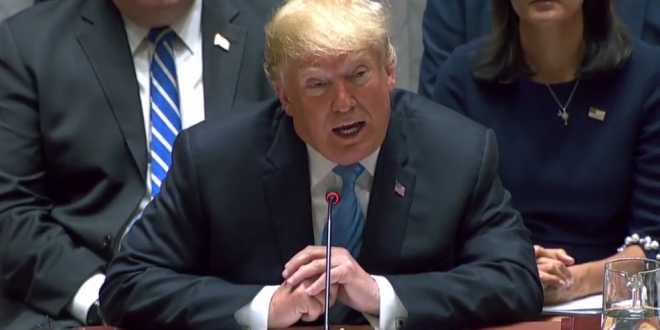 Even as world leaders step up to the podium at the U.N. General Assembly on Wednesday, the lion’s share of attention will be down the hall, where President Trump will be chairing the Security Council.

It will be his first experience in leading a session of the U.N.’s most powerful body, where the U.S. currently holds the rotating presidency – a perch it’s using to double down on its criticism of Iran.

While Wednesday’s council meeting will be on the issue of nonproliferation of nuclear, chemical and biological weapons, Mr. Trump has left little doubt that it’ll be another chance to target Tehran.

Previous Ambassador Nikki Haley: The United Nations Laughed At Trump Because They Respect His Honesty [VIDEO]
Next Bolton Warns Iran: “We Will Come After You” [VIDEO]