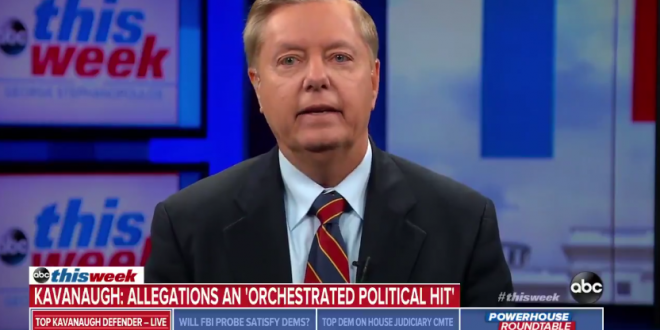 Sen. Lindsey Graham, R-S.C., vowed Sunday to launch a thorough inquiry into Democrats on the Senate Judiciary Committee to find out whether there was any wrongdoing in how they managed the sexual misconduct allegation Christine Blasey Ford leveled at Supreme Court nominee Brett Kavanaugh. “We’re going to do a wholesale, full scale investigation of what I think was a despicable process to deter it from happening again,” Graham said during an interview on ABC News’ “This Week.”

“The FBI will do a supplemental background investigation, then I’m going to call for an investigation of what happened in this committee. Who betrayed Dr. Ford’s trust? Who in Feinstein’s office recommended Katz as a lawyer? Why did Ms. Ford not know that the committee was willing to go to California?” Graham continued, referring to Sen. Dianne Feinstein, D-Calif., and Debra Katz, one of Ford’s attorneys who has been involved in Democratic politics in the past.

Republican Sen. Lindsey Graham suggested that there is no need for the FBI’s supplemental investigation of Brett Kavanaugh to include talking to his former classmates about his drinking habits in college. Stephanopoulos said, “It appears that the FBI will not be questioning those college witnesses who contradict Brett Kavanaugh’s testimony about his drinking. Isn’t that relevant?” Graham said, “No, I think you’re trying to portray him as a stumbling, bumbling drunk, gang rapist, who during high school and college was Bill Cosby.”

“I’m offended by the fact that anybody would hold it against Brett Kavanaugh to be upset by the way he was treated,” he adds https://t.co/eC0ko2RgRI #ThisWeek pic.twitter.com/yJ2L5awngZ

Sen. Lindsey Graham: “It was clear to me that something happened to Ms. Ford … to me, she was troubled by something, but when it comes to Brett Kavanaugh he emphatically denied it” https://t.co/oN8DfUMSQn #ThisWeek pic.twitter.com/3YTOpU3ehc

Sen. Lindsey Graham tells @GStephanopoulos that he thinks Brett Kavanaugh will be confirmed to the Supreme Court https://t.co/UcE8hG4APL #ThisWeek pic.twitter.com/nMEfRmIyZd

“I think the allegation that (Julie Swetnick) makes is outrageous. Not one Democrat mentioned it,” he adds https://t.co/sCbeD4PudT #ThisWeek pic.twitter.com/8hmTwpLcyr

“All I can tell you is it came from somebody with a political motive … no friend would do this to Dr. Ford,” he adds https://t.co/UcE8hG4APL #ThisWeek pic.twitter.com/O7ZLSKVm68

Sen. Lindsey Graham tells @GStephanopoulos he’s going to call for an investigation into “a despicable process,” including “who in Feinstein’s office” referred Christine Blasey Ford to her attorney Debra Katz and “who betrayed Dr. Ford’s trust” https://t.co/sCbeD4PudT #ThisWeek pic.twitter.com/0NrHlu4OjZ