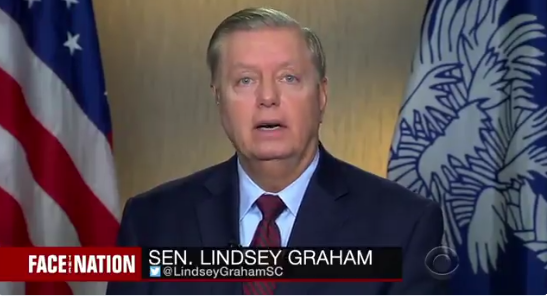 Lindsey Graham: Trump And I Seriously Considered Pulling US Military Dependents Out Of South Korea

Sen. Lindsey Graham confirmed on Sunday “there was a point in time” when he and President Donald Trump had seriously discussed pulling U.S. military dependents out of South Korea — a move that would have been widely seen as a precursor to military action on the peninsula.

The South Carolina Republican said that at the time, “it looked like nothing was going to happen, there was no dialogue going” with North Korea about its nuclear program, adding that “once you start moving dependents out of South Korea that is a signal to everybody that we’re running out of time.”

The hawkish senator was responding to a question from CBS host John Dickerson, who asked about the accuracy of a passage in Bob Woodward’s new book.

Per Woodward, Dickerson said, Trump “was one tweet away from suggesting moving [military] dependents out [of South Korea], and that was read at the Pentagon, that if he sent that tweet out it would’ve look like an act of war.”

.@LindseyGrahamSC on @realDonaldTrump ’s strategy on North Korea: If he has to, he’ll use military force to stop a missile coming to America with a nuclear weapon on it originating in North Korea. We were really close to having to make that hard decision. Now we have some time. pic.twitter.com/0xU5cg0JeM

.@LindseyGrahamSC says he trusts Mueller to do his job: I’m intent on making sure that Mueller completes his investigation without political interference and I can answer questions about the report once it’s issued. pic.twitter.com/Ovi6uB01RJ