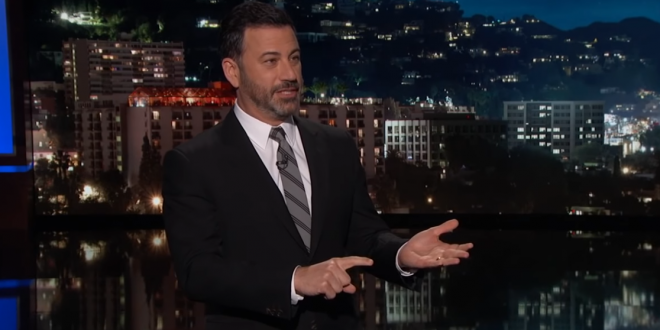 “I agree, you’re not a psychology professor,” Kimmel said on Jimmy Kimmel Live. “You are a dull-witted human canker sore who shoots baby hippos out of daddy’s helicopter because it’s the only way you can get an erection,” the comedian said, referring to Trump Jr.’s contentious hunting hobby.

“Do us a favor, put the Twitter aside. Go rub a tub of Axe extreme-hold hair gel on your empty head, you chinless son of a circus peanut,” Kimmel continued, adding: “Could there be a dumber thing to be than Donald Trump Jr.?”

Watch the clip for bit with Meat Loaf as Kavanaugh.

I’m no psychology professor but it does seem weird to me that someone could have a selective fear of flying.

Can’t do it to testify but for vacation, well it’s not a problem at all.

Kimmel Hits Lindsey Graham: He Lit Up ‘Like Someone Left a Thumbtack On Liberace’s Piano Bench’ https://t.co/JkJoAtqAhH pic.twitter.com/uEqLFjo8hO