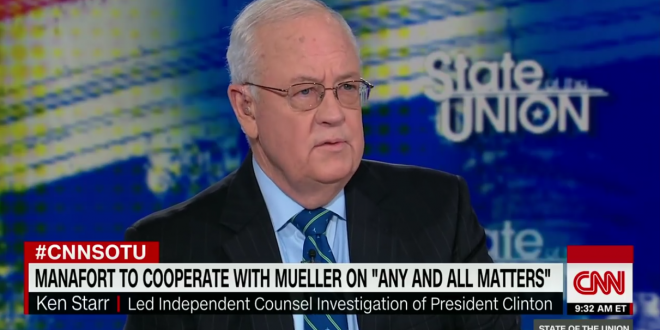 Kenneth Starr: Paul Manafort’s Plea Was Good For The Country, For Trump To Pardon Him Would Be “Unwise”

Ken Starr, the man who led the investigation that resulted in President Bill Clinton’s impeachment, said he was was not surprised to see former Trump campaign manager Paul Manafort cooperate with special counsel Robert Mueller.

“He was under tremendous pressure,” the former judge said Sunday during an interview on “ABC This Week.” “Given the seriousness of the charges that were awaiting him, he did the right thing. He did the smart thing.”

Starr told ABC News Chief White House Correspondent Jonathan Karl on “This Week” Sunday, “It is very likely that Paul Manafort has indicated through his counsel and directly that he can provide very helpful information, useful information to get to the bottom of what Bob Mueller and his team have been charged to do. So it is a very significant breakthrough.”

“And so it’s all the more helpful that Paul Manafort has said, ‘You – you have me and I’m going to give you the truth and nothing but the truth,'” Starr said. “So I think this is this is really good for the country. Let’s get to the truth of the matter.”

Starr on Sunday urged the president not to pardon Manafort, saying such a move would be “unwise,” and compared Trump’s criticisms of the special counsel to the treatment he received from President Bill Clinton’s administration during the Whitewater investigation.

Starr was on CNN to tout his new book: “Contempt: A Memoir of the Clinton Investigation.” “I think that the Trump White House and the lawyers are taking a page from the Clinton playbook,” Starr said. “Attack the prosecutor.”

Previous Trump: Mueller Probe Is Not Allowed Under The Law
Next Trump Hails Fox Show As “MANDATORY Watching”