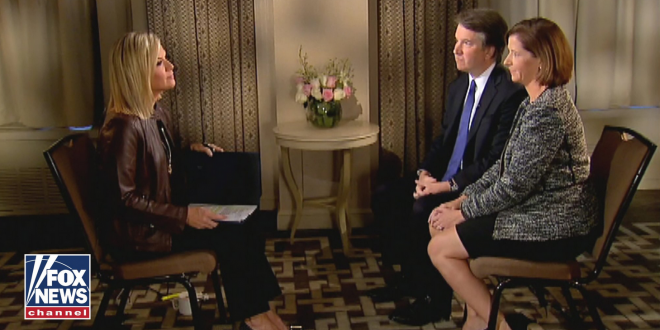 Kavanaugh And Wife To Appear On Fox News Tonight

Kavanaugh will address the two allegations of sexual misconduct that have been leveled against him, as well as his upcoming Senate Judiciary Committee hearing on Thursday “and the effect these claims have had on his family,” per the network’s statement.

Judge Kavanaugh to give joint interview with his wife to Fox News’ Martha MacCallum – making case in broadcast tonight not just to public but to Senate Republicans and a key Oval Office demographic.

TUNE IN: Brett Kavanaugh and his wife Ashley speak out on the Supreme Court nomination controversy in a Fox News exclusive, TONIGHT on ‘The Story with @marthamaccallum’ at 7p ET. https://t.co/NgifZH0mP2

Previous McConnell Rages About “Smear Campaign” [VIDEO]
Next NRA President Oliver North: Brett Kavanaugh Is Being Smeared Because He Backs The Second Amendment