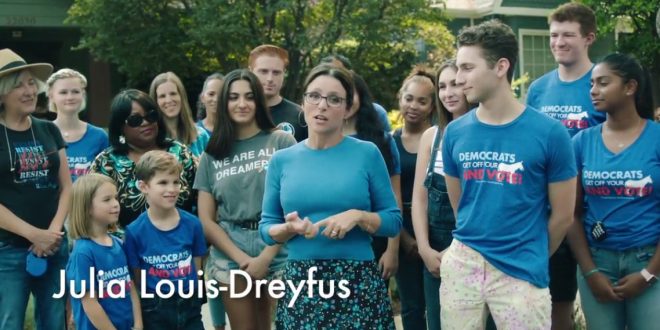 Julia Louis-Dreyfus has a message for American citizens ahead of the upcoming midterm election: Don’t just vote — volunteer.

PEOPLE can exclusively announce that the actress, who has long been an outspoken Democrat, has partnered with registered Federal PAC Local Majority to put together a PSA — directed by her husband Brad Hall — aimed at getting out the vote.

“A corrupt, self-obsessed, inept moron who somehow becomes president of the United States? That’s the character that I play on HBO’s Veep,” she says in the PSA. “But when I’m off of TV, I’m not a politician, I’m not an expert, I’m a citizen. And I know that the midterm election on Nov. 6 is beyond important. It is vital.”

“I’m a cancer survivor, and I am really lucky because I had access to excellent health insurance, even with a pre-existing condition. That’s the way it should be for absolutely everybody, and it’s not,” she says. “The Republican Congress is making it worse, but the Democrats can change that.”

The campaign encourages people to visit MultiplyYourVote.org, where they can find where and when they can volunteer to help win back Congress in November. JoAnn Loulan from the grassroots organization behind the campaign, Local Majority, said was inspired to start the organization after the 2016 election.

Previous LIVE VIDEO: Trump Holds Presser With Polish President
Next Anita Hill: We Can Handle This Issue Better In 2018