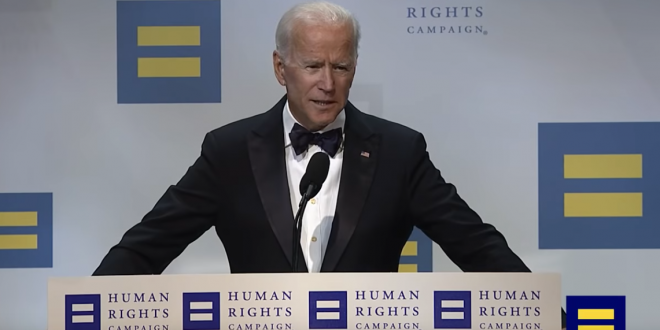 Joe Biden: I Wish I’d Spoken Up About Trump Sooner

Former Vice President Joe Biden Saturday night told the audience at the Human Rights Campaign’s National Dinner that he wished he trashed President Trump sooner. “Barack and I agreed we would be quiet for the first year to let the new administration get up and running,” Biden said. “God forgive me,” he said, making the sign of the cross over his chest.

Both Biden and his wife Jill, who introduced the former veep, characterized Trump as a bully. “The president uses the White House as a literal bully pulpit,” Biden said at one point.

Biden appeared at the dinner as speculation heats up that he’ll run for president in 2020. He has another big event in D.C. next week for his Biden Cancer Initiative, and is also expected to campaign for Democrats through the fall.

MUST WATCH: During the #HRCNationalDinner, former Vice President @JoeBiden gave rousing remarks on his work to advance equality and spoke on the importance of voting in the November midterms. https://t.co/HYuq7jiN8w pic.twitter.com/aLIPnWJHzs

Thank you @EricHolder for speaking at this year’s #HRCNationalDinner and for continuing to be an outspoken advocate for LGBTQ rights. Your work to advance equality during the Obama administration endures for generations to come. pic.twitter.com/DVfEKx6lKL

“That myth is that gayness orbits around straightness, transgender orbits around cisgender and that all races orbit around whiteness. This myth is wrong. But this myth is too real for too many.” – Anne Hathaway #HRCNationalDinner

Previous Jeanine Pirro: Democrats Are A “Pack Of Demon Rats”
Next Alexandria Ocasio-Cortez: Medicare For All Is Not A Short-Term Band-Aid But A Generational Investment