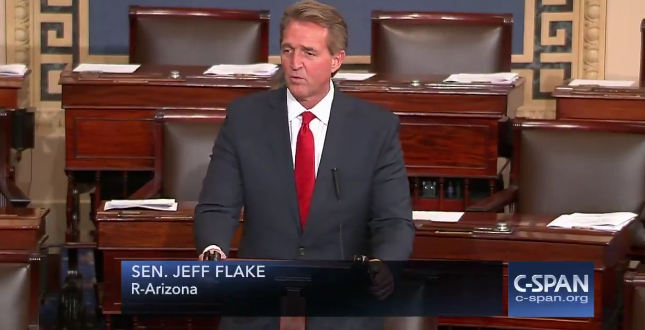 Republican Sen. Jeff Flake just gave an emotional speech on the Senate floor in which he said that Kavanuagh’s accusers deserve an apology. “These people are not props for us to make our political points,” he said.

Flake also went after Trump, saying, “I do not believe that a claim of sexual assault is invalid because a 15-year-old girl didn’t promptly report the assault to the authorities, as the president of the United States said. How uninformed and uncaring do you have to be to say things like that?”

Flake also revealed that he and his family have gotten death threats because he supported a Senate hearing for accuser Christine Blasey Ford.

UPDATE: Here’s an excerpt from the full transcript:

We sometimes seem intent on stripping people of their humanity so that we might more easily disregard or defame them and put them through the grinder that our politics requires. We seem, sometimes, to even enjoy that.

For the past two weeks we have certainly seen that happen to both of these human beings, for whatever reason – because we think we are right and they are wrong, because we think that our ideological struggle is more important than their humanity, because we are so practiced at dehumanizing people that we have also dehumanized ourselves.

An apology is inadequate, of course, but it’s a start. We can’t very well undo the damage that has been done, but we can govern our own behavior as we go through this painful hearing tomorrow, and the days afterward. We must do that, lest we do even more damage. Some of the public comments about both of these witnesses have been vile.

His full speech is below.