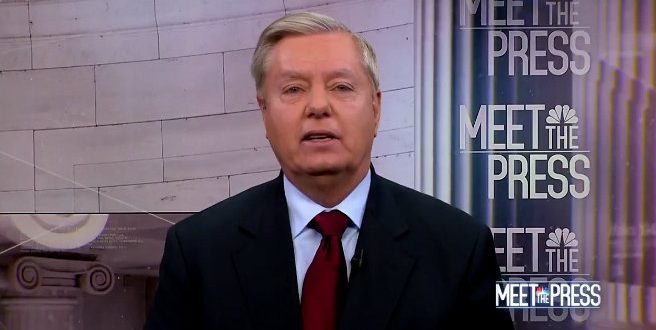 “I want to listen to her, but I’m being honest with you and everybody else. What do you expect me to do? You can’t bring it in a criminal court, you would never sue civilly, you couldn’t even get a warrant. What am I supposed to do? Go ahead and ruin this guy’s life based on an accusation? I don’t know when it happened, I don’t know where it happened, and everybody named in regard to being there said it didn’t happen. Unless there’s something more, no I’m not going to ruin Judge Kavanaugh’s life over this. But she should come forward, she should have her say, she will be respectfully treated.” – Sen. Lindsey Graham, speaking this morning on Fox News Sunday.

On Dr. Ford, @LindseyGrahamSC tells Chris: Chairman Grassley’s bent over backwards to make this happen, the offer is Thursday at 10 o’clock. #KavanaughConfirmationHearing pic.twitter.com/SbTWBxq5N8

.@LindseyGrahamSC: “I want to listen to Dr. Ford, I feel sorry for her. I think she is being used here. People in my view are using her.” pic.twitter.com/d5mnXV5E2T

Previous McConnell Asked Trump To Lay Off Christine Ford
Next Bloomberg: I’ll Decide On 2020 After The Midterms