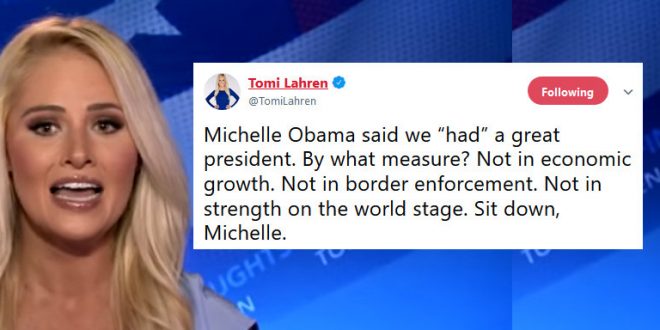 Fox News commentator Tomi Lahren is telling Michelle Obama to “sit down” after taking issue with the former first lady calling her husband Barack Obama a great president. Lahren, who will be hosting a show on Fox’s soon-to-launch subscription service called “Fox Nation,” was responding to remarks Michelle Obama made at a rally in Las Vegas.

“Here’s what we have to do,” she said at the “When We All Vote” rally. “If we want qualified people that we trust, then people have to vote. Because you can’t vote some of the time and then sit out.” “You know, we saw that happen. We experienced that. But we had a great president,” she said, referring to former President Obama.

Lahren, you may recall, once issued a raging condemnation of Obamacare only to be exposed as being on her parents insurance thanks to Obamacare.

Larhen’s shtick of calling everybody she doesn’t like a “snowflake” has earned her a hosting spot on the soon to launch subscription-only Fox Nation.

Michelle Obama said we “had” a great president. By what measure? Not in economic growth. Not in border enforcement. Not in strength on the world stage. Sit down, Michelle.

Previous White House: Rod Rosenstein To Keep Job For Now
Next Kavanaugh: I Won’t Be Intimidated Into Withdrawing