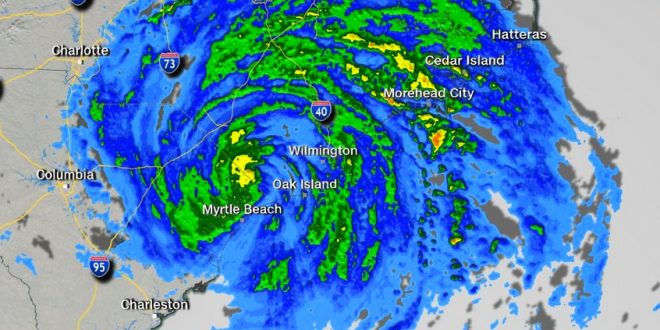 Blowing ashore with howling 90 mph winds, Hurricane Florence splintered buildings, trapped hundreds of people and swamped entire communities along the Carolina coast Friday in what could be just the opening act in a watery, two-part, slow-motion disaster. At least four people were killed.

As 400-mile-wide Florence pounded away at the coast with torrential downpours and surging seas, rescue crews used boats to reach scores of people besieged by rising waters along a river. More than 60 others had to be rescued as a cinderblock motel collapsed.

A mother and baby were killed when a tree fell on a house, according to a tweet from Wilmington police. Also, one person was killed while plugging in a generator, and a man was knocked to the ground while outside and died, authorities said.

A North Carolina resident who decided to ride out Hurricane Florence in his home captured this footage of flooding on Friday https://t.co/MITwiwiheD pic.twitter.com/l4dfFh6E4c

Our hearts go out to the families & pets impacted by Hurricane Florence. To aid in relief efforts, Purina is donating $25K to @GreaterGoodorg to support rescue efforts, purchase supplies & fund rebuilding initiatives for communities affected by the storm https://t.co/TvkvorGnEZ pic.twitter.com/YKEB9hNWsh

Florence is no longer a hurricane, meaning the winds are not sustained at 74 mph. The rain, however, will continue pour over the Carolinas, possibly exceeding 25″ in the next 48 hours. pic.twitter.com/eTyS9wxz5s