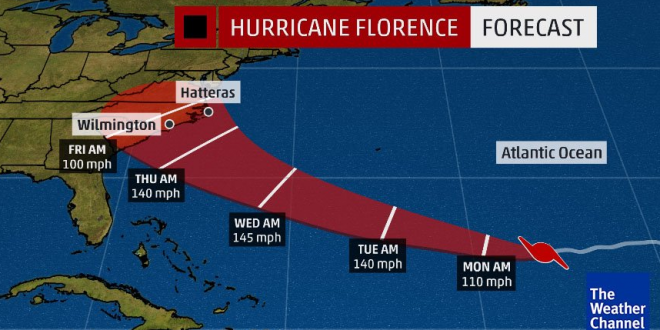 Florence On Track To Slam Carolinas At Category 4

Hurricane Florence is tracking toward the East Coast with inevitability rarely seen in storms several days away from landfall. While forecasters were careful to cite “high uncertainty” in recent days, their tone changed after watching the storm’s eventual path barely shift from what they had considered to be a worst-case scenario.

Monday morning, as the storm rapidly gained strength, the National Hurricane Center was forecasting Florence to become a strong Category 4 storm before making landfall along the Southeast or Mid-Atlantic coast on Thursday.

Computer model forecasts generally project the storm to make landfall between northern South Carolina and the North Carolina Outer Banks, although shifts in the track are still possible and storm impacts will expand great distances beyond where landfall occurs.

Gov. Henry McMaster on Sunday urged all South Carolina residents, whether they live on the coast or further inland, to make preparations for the potential mess Florence could bring. He invoked one of state’s most devastating storms to make his point.

“I’d say get ready. The winds on this one are predicted to be more powerful than the ones from Hugo,” McMaster said in a midday press conference, referring to the 1989 hurricane that hit South Carolina as a Category 4 storm, with winds that blew at 138 mph and had recorded gusts of more than 160 mph.

“Pretend, presume, assume that a major hurricane is going to hit smack dab in the middle of South Carolina and may go way inshore,” McMaster said.

As Hurricane Florence approaches the East Coast, Governor Cooper has issued a state emergency and state workers are making preparations.

At the State Emergency Operations Center in Raleigh, emergency management leaders have started coordinating with state, local and federal officials to prepare for the storm. During a discussion on Sunday, Gov. Cooper said we have to prepare for the worst. The governor also said he expects there will be evacuation orders.

“In North Carolina, we rely on our local officials,” he said. “They make the initial call regarding evacuations. They know their communities best. They know which residents might need extra help in getting evacuated, like nursing homes.”