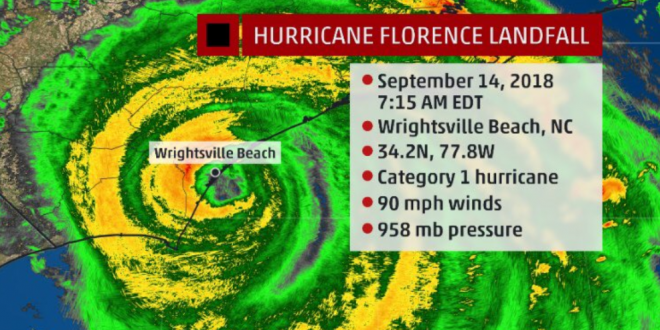 Hurricane Florence has made landfall in North Carolina, but its crawling pace and overwhelming storm surges are setting up hours and hours of destruction and human suffering — with dozens desperately awaiting rescue in one flooded town alone. The Category 1 hurricane, with wind of more than 90 mph and dumping 3 inches of rain an hour, made landfall at 7:15 a.m. ET near Wrightsville Beach, just east of Wilmington.

Florence’s center may linger for another whole day along coastal North and South Carolina — punishing homes with crushing winds and floods and endangering those who’ve stayed behind. In the besieged North Carolina town of New Bern, rescuers plucked more than 100 people from rising waters, but about 150 more had to wait when conditions worsened and a storm surge reached 10 feet.

More than 370,000 customers were without power Friday morning, according to emergency management officials, as social media users shared videos of snapped trees and water rushing onto coastal streets like rivers. North Carolina Gov. Roy Cooper said there were no immediate reports of deaths, but cautioned the flooding and rising waters could inundate low-lying communities for days.

Wilmington Mayor Bill Sasso said his city has gotten more than 100 emergency calls, but crews have had difficulty getting out while the storm rages ashore and there’s been “significant” inland flooding. “It’s pretty bad. It’s deteriorating very quickly, and it’ll be like this for quite some time,” Sasso told “Today.”

Officials said they were most concerned about torrential rainfall and flooding as high tide approaches. The National Hurricane Center said a gauge in Emerald Isle, about 84 miles north of Wilmington, reported 6.3 feet of inundation.

WOW! This is the flooding from the Pungo River in Belhaven, NC, which has risen dramatically due to Hurricane #Florence. pic.twitter.com/ei5ZoaNaSD